Hint: There is probably nothing wrong with [component name].

I spent the better part of today fixing a seemingly intractable problem in a Delphi project. The project compiled fine but refused to run. It raised an EcomponentError exception with the message “A component named btnClose already exists.”

The IDE showed nothing to be amiss. There was only one such button in the entire project group. I removed the button and the error turned its affections to another button. 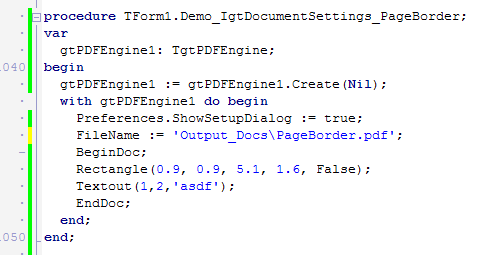 I decided to give the code another look. The problem was with this line.

It was sitting there snug as a bug in a rug. It should have been:

Instead of creating the instance off the class name, I tried to use the instance name. I corrected my super silly mistake and there were no more run-time exceptions. This can happen if you share coding time between Visual Studio and Delphi. The autosuggest feature in Delphi 2010 brought up gtPDFEngine1 before TgtPDFEngine. Anyway, I wrote this writeup hoping it might be useful for someone.